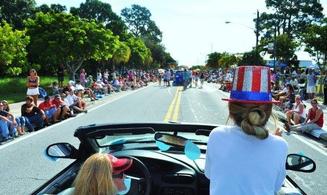 ​​​Englewood Pioneer Days
We were unable to upload your file. Please ensure your file is 10MB or smaller in size.

Got old photos or stories?

We want to save and share all the Pioneer Day memories.

Use the submission form below and forward us your memories. We'll post them and credit you and we'll remove them anytime you like.

Thank you for helping preserve Pioneer Days history ! If we have any questions we'll contact you. Thanks again,

In 1956 Jo Cortes, local journalist and community activist, came up with the idea of "Pioneer Days." The purpose was to celebrate the 60th anniversary of the founding of Englewood and to honor local pioneers. Summer was a slow time in Englewood and a festival like this would also bring many people into town to help local merchants. Jo, and over 40 others serving on various committees, planned for the first Pioneer Day's Celebration to last three days, starting on August 17 (the date that the first lot was platted in Englewood in 1896).

One of the most important ground rules during this first Pioneer Day Celebration, was that all males in town had to wear a specific type of derby on their head, and females had to adorn themselves with prescribed headpieces. Violators would be taken to a make-shift jail by either a beautiful young female deputy, or a bearded male deputy, and pay 50 cents to be released.

A "Pioneer Day Parade" started off the activities on Friday at 9:30am. Thirty eight local children bought out every roll of crepe paper from local merchants, and decorated their bikes to the hilt. Every type of wheeled vehicle imaginable was included in the parade, including bicycles, tricycles, carts, floats, and even doll carriages. All children were presented a real silver dollar for riding in the parade. All boats participating in Saturday's children's sailing regatta were pulled on trailers in the parade. It started at what was then Don's Bakery, and worked its way to Veteran's Park on McCall Rd. Unfortunately a storm started just as the parade was underway, and the crepe paper made a mess of the bikes and floats. The rain didn't dampen the enthusiasm of the participants, as they rode on with pride. Onlookers however did watch the parade from the comfort of their cars.

Once the parade reached the park, Chamber of Commerce president Robert H. Waddle gave a welcoming address to all those in attendance. A luncheon was held to honor 50 year pioneer residents of Englewood, and six visitors from Englewood TN, who had won an essay contest that asked, "Why would you like to spend a week in Englewood Florida?" Each of these six winners won an all-expenses paid, week-long trip to our town.

After the luncheon, there was a water ski show at 2:30pm near the "Big Bridge," which is now the Tom Adams Bridge on Beach Road. The rain amazingly stopped just in time for the 20 or so skiers to put on a great show for over 200 spectators. From 5:30 to 7pm, a community-wide seafood dinner, that only cost one dollar, was held at the American Legion Hall. The final event on Friday was a jam-packed street dance, in the parking lot of Ainger's Market on McCall Road, currently the location of the True Value Hardware store.

Saturday featured a busy schedule that kicked off with swimming races from Beryl Chadwick's dock. The event featured 12 classes and included both children and adults. After the swimming races, the children's sailboat regatta was then held. Competitors had to not only sail their boats, but also rig up masts, install centerboads, and prepare their crafts for the races. The Englewood Lion's Club later sponsored a sparerib barbecue dinner at 5:30pm at Calhoun Field. After dinner, Lion's Club members played baseball. The highlight of Saturday's events had to the "Shipwreck Dance" held at Wood's Cocktail Lounge near the current Merchant's Crossing complex. The music was presented by "The Lee County Playboys." No admission was charged, and prizes were given for the best costume showing how one would look if their ship was wrecked.

The final activity on Sunday was a huge regatta, which planners said included the biggest number of boats ever assembled on Lemon Bay. All participants decorated their crafts, and local merchants provided cash prizes ranging from $3 to $50 for the best decorated boats. All kinds of craft showed up, including: slave ships, pirate ships, canoes and even commercial boats.

After all was said and done, Jo Cortes, organizer of Pioneer Days, said that she was more than satisfied with success of the affair, and predicted it would become an annual event. Little did she know that we would be celebrating the 53rd Pioneer Days Celebration on the 2009 Labor Day weekend. Although some of the events, locations, and dates have changed from this first Pioneer Days Celebration, the friendly atmosphere found among all those present has never changed. Thank you Jo, for a great idea that really brings Englewood together!

(EPD wants to attribute every photo or article. Do you know who authored this? Contact us)